The attached is from the quarterly book that was published in January - March 2005
What is a Firefighter?

What is a Firefighter?

of a little boy. He has never gotten over the excitement

of engines and sirens and danger.

Yet he stands taller than most of us.

He is a firefighter.

He puts it all on the line when the bell rings.

A firefighter is at once the most fortunate and the least

He is a gentle man because he has seen the awesome

power of violence out of control.

He is responsive to a child's laughter because his arms

have held too many small bodies that will never laugh

He is a man who appreciates the simple pleasures of life

bed for bone and muscle compelled beyond feeling - the

camaraderie of brave men - the divine peace and selfless

service of a job  well done in the name of all men.

He doesn't wear buttons or wave flags or shout

When he marches, it is to honor a fallen comrade.

He doesn't preach the brotherhood of man.

This poem goes back a long way and a time when only boys were though of being firefighters. In today's world we do have girls that have become firefighters and officers.

May God Bless Them All...

Back Up and Running

SAFETY TIPS for the MONTH
November 2022 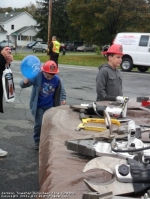 This site has been viewed 259,556 times.
Calls
News
Events
Pictures
Apparatus
Maintained by the members and staff of Jackson Township Volunteer Fire Company. Designated trademarks and brands are the property of their respective owners. Copyright © 2006-2022. YourFirstDue Inc. All Rights Reserved. Content on this web site is supplied by Jackson Township Volunteer Fire Company. YourFirstDue Inc. cannot be held responsible or liable for any content, text, pictures, or any other media found on this web site.
Management login
Powered by